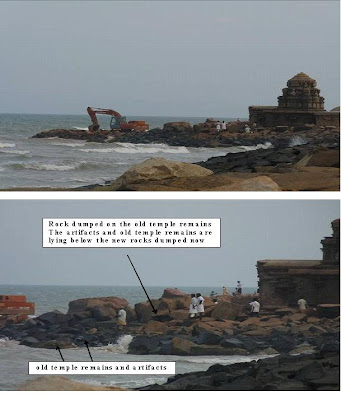 The Masilamani Nathar temple at Tharangambadi suddenly has some spurious action going on. Cries of destroying the artifacts and pillars, temple remains below water is falling to deaf ears and a private construction company called Mubarak construction is doing permanent damage by dumping huge granite rocks on and above the temple artifacts, without caring for the antiques and their retrieval.
We tried to call the commissioner HR&CE who had ordered for the temple renovation but I was told not to 'advise'him and he knows the best! The roaring sound of the bulldozers and cranes can be heard hear too far away in Chennai as my mind has already gone there spending sleepless nights so far.Trying to get any reporters to report the plight of Masilamani Nathar temple fast, both TOI and The Hindu reporters are yet to wake from their slumber :(
Local INTACH official Mr. Asaithambi has sent me these photos and is also praying that some miracle intervention from Lord Shiva himself should stop such barbaric act in the renovation!
This is my personal attempt and blog and REACH has nothing to do with my attempts. We have told the archaeology minister for state Shri. Thangam Thennarasu to talk to Shri.Periakaruppan the minister for HR&CE to stop this dumping. Let's hope good sense prevails to the men in power!

The panoramic view of the Uthiramerur temple as on Tamil New year day is
here:
http://www.flickr.com/photos/rajushanthi/4523225582/

Arasar Koil comes on the road which turns right from the Padalam X road on the GST highway just after the Uttaramerur Vandavasi X road junction. Some 6-7 kilometers in, we can come across the Puliparakoil where a Shiva temple is under renovation and presumably wrong sthapathis and apathy (paucity of ever growing demand for funds from spurious sthapathis) have made the renovation a stand still. Inscriptions thrown out, least regard for preserving heritage structures and style, dwarfed Gajabrushta Vimana and all horrible ways of temple renovation stands a testimony to teach us 'how NOT to renovate' a temple!
For photos see here and Raju's elaborate blogs here and here.
But our destination was Arasar Koil (photos), where our founder had already visited and begged the authorities not to demolish the strong vegetation grown stone structures.After some political storm, and in fightin, we believe now the temple is in under good governance and we were called again by the famous Raju's temple blog - Rajendran Ganesan and also were informed by the great renovator of temples - Shri.Vadapalani S. Ram murthy.
Now that the stones which were part of the Sanctum Sanctorum of the Vishnu shrine is torn apart and the Thayar temple is damaged further but thank her, the temple stones are not pulled down, we have taken measurements and some old photos for reference to re-estimate the cost of renovation and will be reporting back soon to the authorities the cost for renovation.
En-route just half a kilometer before reaching Arasar Koil temple, you can see a 800 AD Kali relief with a Saivaite holding a Shiva Linga on his head, and a Swayambu Shiva Linga with an over sized Avudai (Base stone) . Dr.Satyamurthy REACH founder confirmed the age of the relief and also the Svayambu status of the Shiva Linga and said we can make a small shrine for these two rare pieces of art and antiquity, while renovating the Arasar Koil Vishnu temple.
Also we found a Shiva Linga shown to us by Arasar Koil bhattar Shri.Kannan in the near by Pathoor village. The mid-day meal scheme attendants of the primary government school nearby were requested to do at least an abhishegam daily and offer the food before serving to the children. Even though they are coverts (Christians) now, they readily agreed to do the abhishegam daily and offer food as requested. Rajendran@ Raju of temple visits blog and Suresh and Chandra did abhishegam on seeing the Shiva Linga. Back to the highway, we were just dumb founded on having mixed experiences - seeing a Kali relief of 8th century and a Swayambu Linga, doing abhishegam for the Pathoor Shiva Linga and then seeing how bad a temple renovation can go wrong, in Puliparai Koil and how one stands testimony to wrong demolition of the sanctum (Perumal sanctum) and another waiting for renovation in Arasar Koil.
Then we went to Edamachi (எடமச்சி) which comes on the Uttaramerur - Thirumukoodal road where the young girl Sathya has made a great transformation of a ruined temple into an almost complete one in a month's time. Unaware of the technical issues two vimanas have already sprung up above the Shiva shrine and the Murugan shrine. There are still roots of vegetation seen around as well as some seepages from the ceilings. Chandra along with Dr Satyamurthy, REACH founder visited again and we from REACH FOUNDATION had suggested to work out a saving mechanism : Grout cement liquid into the crevices by a pumping machine and close all gaps, scrapping the top weather coarse again where ever the seepages are seen and also apply tree killers once more where the vegetation have sprung up. One sthapathi had been put on the job and he should be working from 16th April 2010 the time when this blog is released! The costs are sponsored by Raju himself and the machine and chemicals by REACH.
The photos of Edamachi temple visit are here.
On the way to Edamachi, we had seen a idol resembling Murugan but later we were told by Dr Satyamurthy that it may be a warrior who sacrificed his life for some great work or saving the village, or war fare whose statue is kept on the Samadhi. Chenna Veera and Vel are missing but only a cross held club can be seen as well as the hillock temple behind, which made us think the statue was that of Bala Dhandayudha pani (Murugan).
Raju has written all the details of this girl of Edamachi and her saga well in this blog and also the story of the small girl Thilagavathi doing Puja for the Shiva Linga whose temple is buried beneath the same spot at Kidangarai.
Dr Satyamurthy opined that proper excavation would bring out the Pallava period Shiva temple sanctum sanctorum out and the Chandikeswara is the rare piece of art which also belongs to the 8th century AD.
We will update on the renovations regualarly here and in our main web URL www.conserveheritage.org