Kidangarai Pallava temple springs back to life again -The potter and the clay story!

Hope patrons remember the Kidangarai Runa Hara Iswarar temple - which was pulled our from no where beneath 2 huge Tamarind trees. The whole Pallava foundation got excavated some 3 years ago.

Kidangarai - now we understand is literally Kadan Karai (absolve or dissolve your debts! - in Tamil) has become Kidangarai due to long usage of name by localsin a different slang. But the deiva prasnam revealed this Shiva as KAdan Karai Iswarar- Runa Hara Iswarar! The ponds beside and the Amman's name all were revealed. Chandra turned as priest to start the Bhoomi puja for this temple, when nobody turned up! Amman sculpture yet to be found, but the Swayambu Shiva Linga was kept in a make shift temple below asbestos roofing all these years.

Thanks to the sudden funding this year we got from our Epigraphy student Gayatri Anandapadmanabhan, in remembrance of her father, and a dream she had, her seeing a Shiva temple amidst green lush grass and dilapidated. With our data base, we could zero in Two temples, the Poigainallur Iswarar temple in Bangalore Kanchipuram Highway and this one- Kidangarai Runahara Iswarar temple

The PRO/Secretary of REACH, Shri J. Chandrasekaran strangely started a nano-clay based water filter unit in the nearby abandoned rice mill at Kidangarai, belonging to a farmer who is struggling to meet his financial ends, as water table is dwindling and labour force becoming rare. Chandra's first attempt in Tiruttani failed and he was then looking for some place to restart the nano-clay candle electricity free water filter making unit. (www.terafilwater.in).

It seems that the Lord bestowed him this site, both the temple as well as the rice mill to make his destiny. Chandra took a vow that for each candle he makes, he would partake a fee for rebuilding the temple. After all toil and struggle the basement was completed almost a year agao and the candle unit was also stopped owing to labour problems. Chandra decided to give a deep dig, automating the whole plant to ward off labour problem and rejunuvate the temple activity. With Partial funding of what Gayathri Anantapadmanabhan gave and his own savings again in a year, the temple today has been built till the roof.

There are now some hiccups, for purchase of stone lintels and vimana, some shortage in funds, but hopefully we wish we can bring back a brick lime mortar built Pallava temple back to glory before the rains come down this year in 2014!

....And Runa Hara Iswarar is again smiling, Chandra has got some labours the same day when he started the renovation work just a fortnight ago and candles have started being made in the rice mill premises. Slowly debts are getting warded off! Is it monetary or the debt of birth? (பணக்கடன் அல்லது பிறவிக்கடன் ?) Only he knows!

Again the riddle why Chandra got into clay candle making was also solved now.

The Veppathur Veetrirunda Perumal temple near Kumbakonam is also seeing flurry of activity again, plans to restore the temple is now stronger, thanks to the liberal donation of our beloved REACH members, two great sisters, Rohini and Shribala, again two saviours who have planned to garner support from their family to see the temple back in glory.

The biggest challenge was to make stronger bricks matching to the Pallava Era bricks, bigger in length and width, just an inch tall! Having learnt the nitty gritties of clay malleability and their properties for all these 6 years, Chandra is now ready to take the plunge - make the 2 lakh bricks which are needed for the Veppathur project using modern technology and making them faster and stronger to satisfy the huge demand of the sthapathis. The Lord has master plans - it is we who are kneaded and moulded under his arms!? Who knows, we just go by his call! What say?

Dear All,
The REACH Heritage Awards will be presented this year on the 7th of December 2013, at Chennai. Invitation enclosed. Please visit and make the function a grand success. 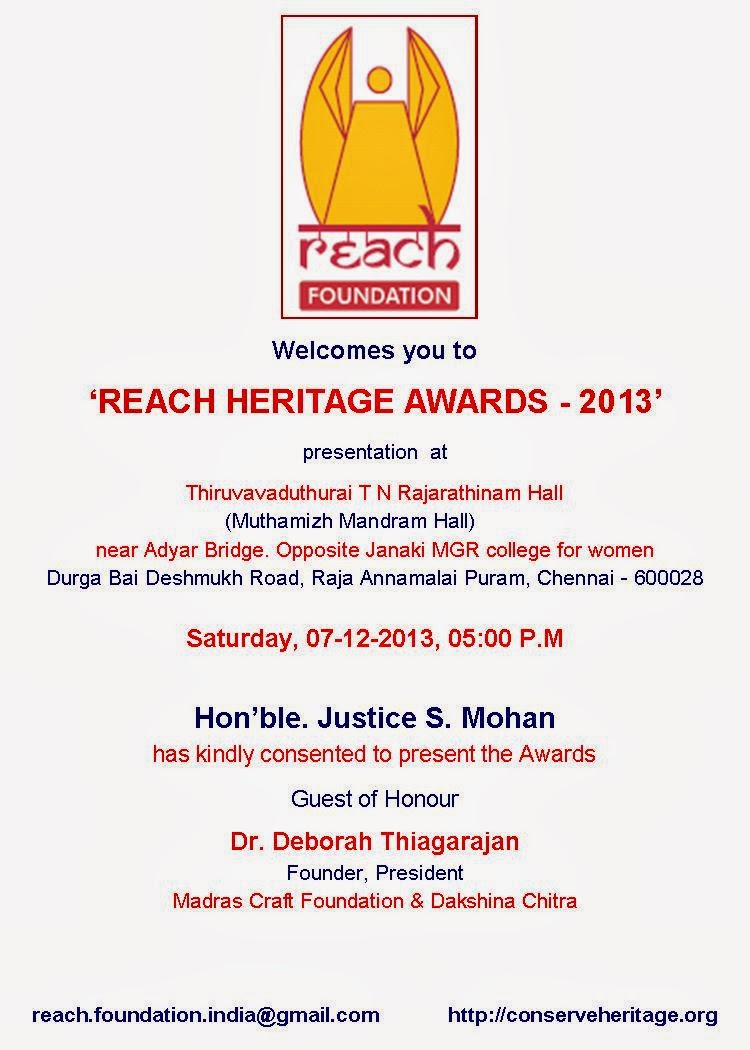 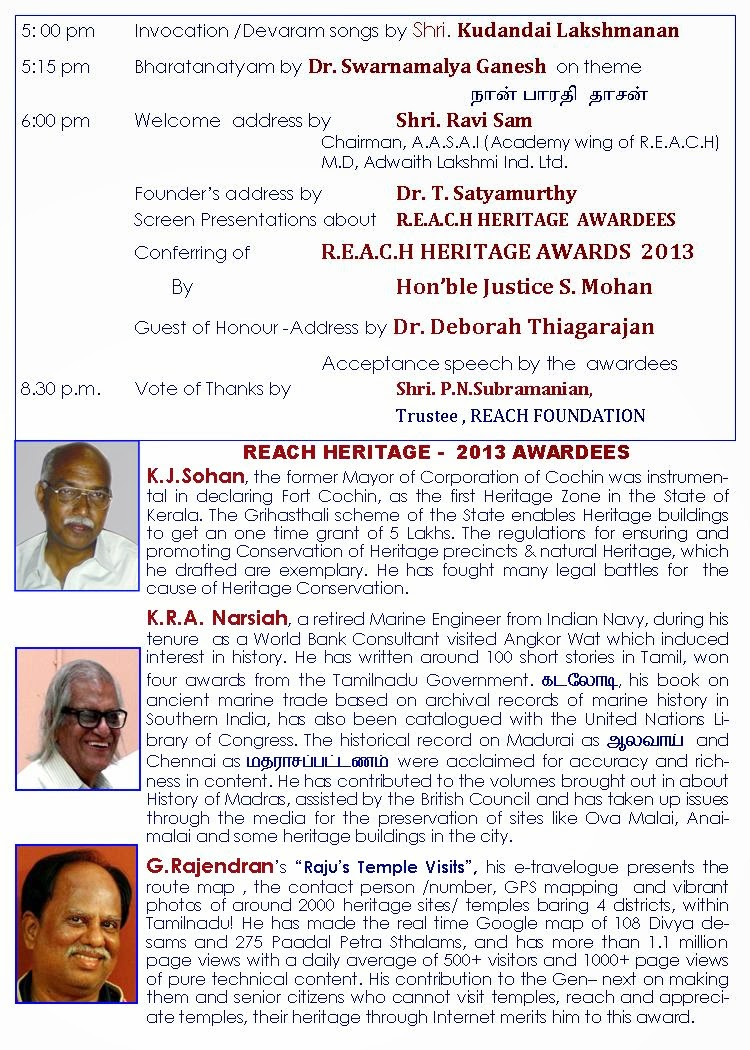 A sequel on exploring the date and time of Adisankara with the evidences available as an archeologist's view is well written in this article by Dr T Satyamurthy our founder.
Tamil translation by PRO Chandrasekaran J 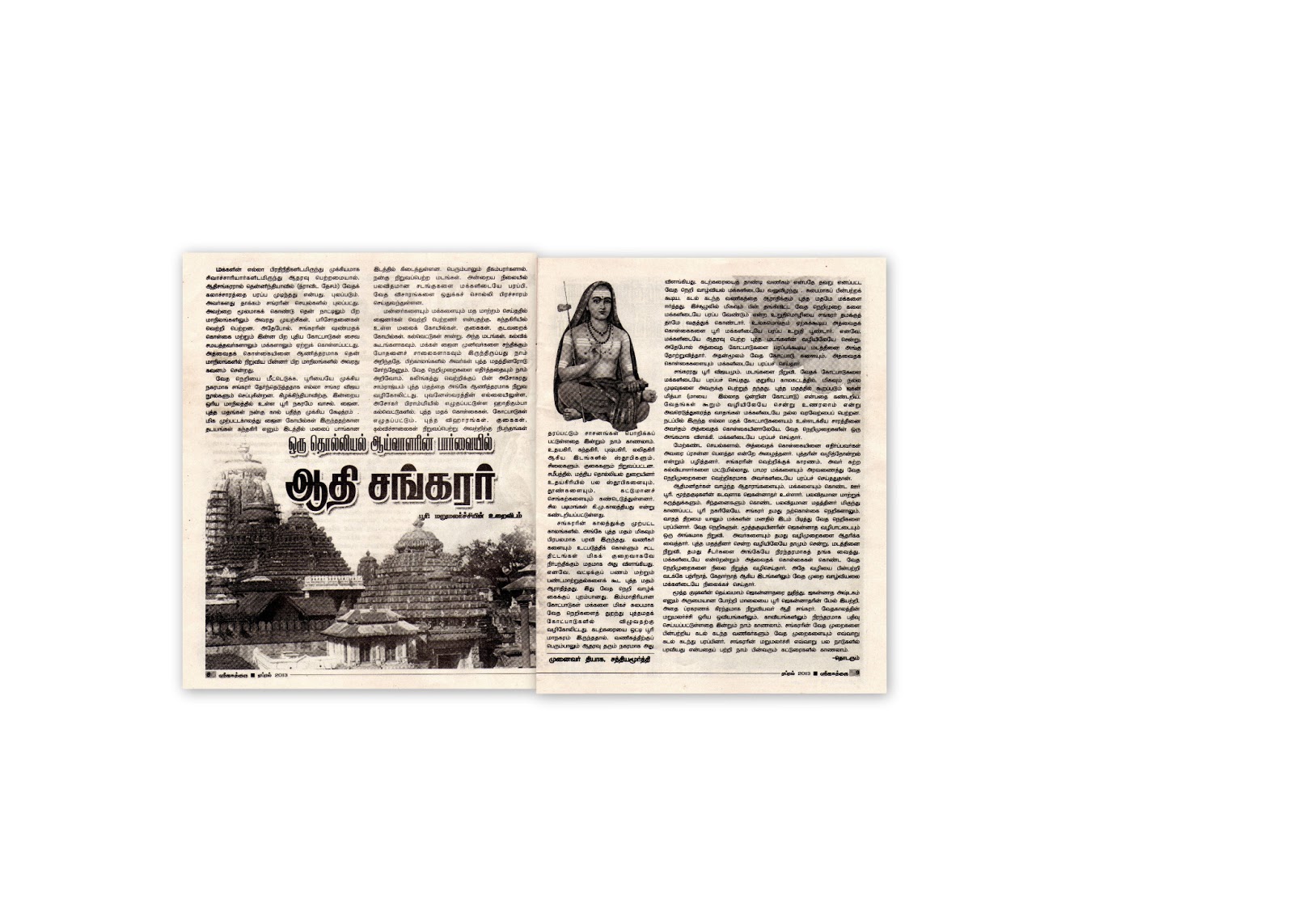 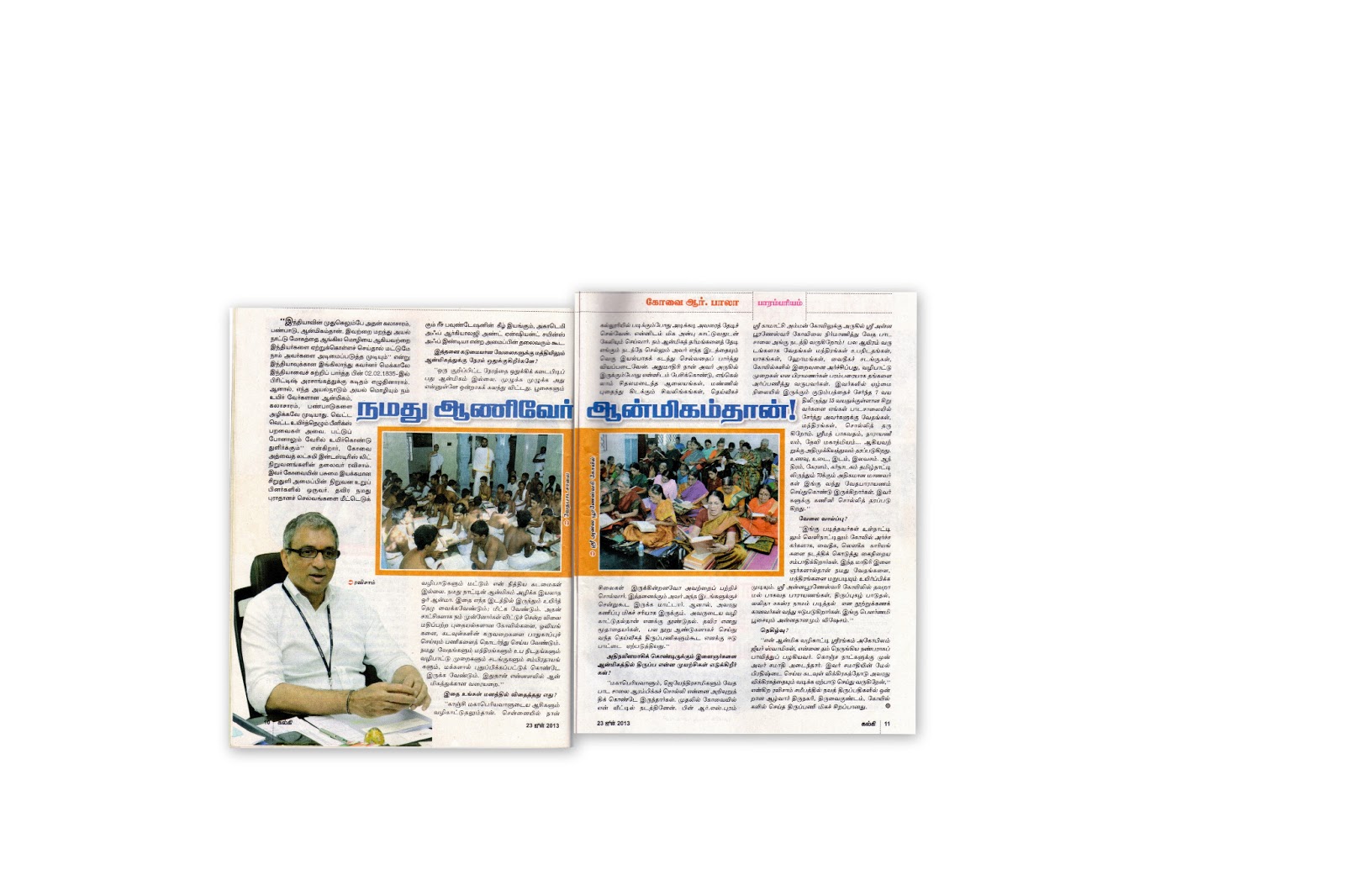 The mandap is restored to its pristine beauty by us and we have so far completed the following tasks in the past 3 years of meticulous work.
1. Removal of lime from all pillars and bases.
2. Cleaning of whole mandapa
3. Strengthening the plinth and floors and relaying granite slabs around the mandapa to avoid seepage of water
4. Water proofing and re-plastering the entire roof using lime mortar
5. Re-sculpting all the lime stucco figures atop the mandapa
6. Laying  a 3 feet tall parapet wall around the mandapa
7. Stainless Steel railing around the mandapa

and finally we will fix spot lighting and electrification with pleasing aesthetics, to enhance the beauty of the carvings. Hope by this September end 2012, the whole Mandapa will glow as a remarkable land mark in Kanchipuram... And let's not talk of the work done around within this same temple premises, done by various agencies under the endowments department! God bless them :(

We blogged the story inadvarently in REACH FOUNDATION history blog.
Here it is

The update on renovation:

The Stone temple that would not fall off!

See this article advarently published in another web site of REACH

The GK Mandap as we call, or the Gangai Kondan Mandap in Kanchipuram, just opposite Sankara Mutt, where a big Hanuman is worshiped and where the annual utsavam happens and the traditional Umbrella Makers for the Varadaraja make them for ages,  was in danger. We saw the lintel above the entrance hanging almost, wanting to fall off any moment. We immediately supported it with two poles and sought help from members and philanthropists. To our rescue the Lord himself sent his devotee, Shri Narayanan, a Power plant industrialist and our patron. He immediately took up the total cost of the project and after some dilly-dallying with the endowment officials, we finally got the approval and the work is on! The roof was over burdened with extra weight from the shops all around, who were dumping all broken walls and tubes, poles etc on the mandap for ages, as well as extra weight due to cement plastering done some years ago by some renovator, had weakened the structures. We have removed all the extra weight and the broken lintel is to be replaced with a 19 feet long single stone bolster, to be cut and shaped to size, sought from a quarry in Bangalore!

The updates on Gangai Kondan Mandap as on May 2012

The police, the shop keepers around and the Umbrella makers inside the mandap complicated the work daily and amidst all problems, we were able to almost finish the frontage and I have not visited for the last 2 days but was told that the same has been painted with yellow ochre with lime plaster. The frontage is finished. what is left is the flooring within the mandap but was thwarted the Umbrella makers. The E.O promised that after the Utsavam we will get them vacated for few days and re-do the mandap.

With the help, patience and perseverance of the donor for this mandap, Shri Narayanan, of M/s. PPN Power Limited, an ardent devotee of Shri Varadaraja, we could do this work, and we thank him for all the support. Once we complete totally all the work, we will upload those photos too.

The link of photo updates

The full work is over. There was some delay due to continuous festivals in between and also some resistance from the shop keepers around, as there was no way to go up. Atlast, we could remove all the debris above and restore the mandap, relay the stuccos figures, the frontage and the weather coarse and roof of the mandap.