Within the periphery of Venkaadu within Somangalam Circle, comes village Kuzhathur, near Naavalur. The moment we entered the main village road, we came across a raised earthen mount, approximately some 20 feet tall, sandwiched between two beautiful ponds, with crystal clear water, one having lilies and the other full of lotuses!! The lily pond is for bathing while the lotus pond is used only for drinking purpose. The main feature of this earthen mount is the tall standing Shiva Lingam with broken walls, a broken statue of Vishnu as his friend in penance, having the sky as his roof and the panchabootha his guards! It seems He is oblivious of knowing what’s happening around to an immortal soul, but for the group it as a calling of sorts! No one can exactly depict the sight of the lingam standing out in such remote place! 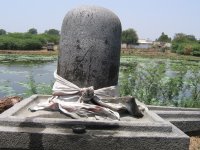 Mr.Ramamurthy immediately got into act, to give the lingam a bath may be after centuries, and the men who came running around on seeing some new faces, offered a plastic pot with water, drawn from the lotus pond. Lo! Went ahead the Abhishekam, and to our heart breaking sight, the water almost evaporated instantly, on touching the shiva lingam!! So hot, it had been and was as if it asked for more. The two villagers, Kumar and Ezhumalai, said they made Abhishekam during the full moon days and offer Prasadam to the lingam. Mr. Ramamurthy insisted that they are gifted and are destined to do that daily, for which the villagers willingly agreed. 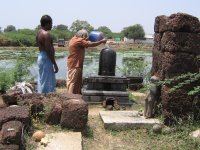 Murali a Vaishnavaite priest in the near by Vishnu temple informed even though the Vishnu temple comes under Government endowment, the Siva temple is not. But he was also willing to do daily poojas to the Shiva Lingam. The villagers promised that a thatched roof within a fortnight. Near to the spot, lies a Kaali temple. The temple, has a deity, but was devoid of daily pooja. The Amman idol also had its Abhishekam that given blessed day. 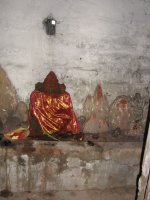 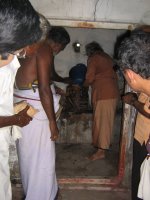 The next in our search was the Karunakaracheri lingam, with a broken ‘avudai’, the Dias for the lingam. Somehow, a local devotee with help of little help from like-minded persons had managed to build a small dwelling in the name of a temple and the roof is yet to be completed. The Shiva lingam, after paalalayam done, is now cooling its head under a neam tree. 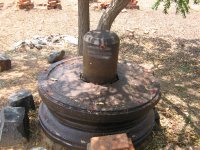 The next place we visited , has a very big campus, having signs of stone pillars, stone carvings within the inner walls of the Shiva shrine, all strewn around, tells us the clear tale that this must have been a big temple. 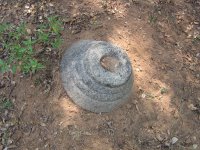 The village, Poonthandalam has its own share of mystery. The Shiva, the story goes, is guarded by Veerabadra, and is called as Agneeswarar. 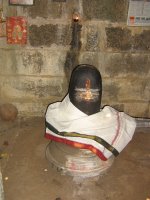 It seems that anyone trying to do Paalalayam (resurrection) to the Lingam, and rebuild temple, does an action equivalent to nibbling the third eye of Shiva! So outrageous this task may look, in the eyes of God, but for one who has will to build the temple, there is a way!

Nearby, a Sai devotee, who also had a vision of Shirdi Sai Baba, taking reappearance as a 14-year-old boy, had started developing a mammoth 5400 square feet meditation hall with two floors above and the groundwork has just begun! This devotee who is totally penniless, and also having a family to take care has been guided by few Siddhas purushas living around Chennai and keeps getting visions of the next step ahead. When he tried to do the bhoomi puja of his meditation hall, he got this message narrated below:-
A Siddar should enter the shrine, do poojas for 24 hours continuously, and get the approval of the Shiva and Veerabadra. The Lingam can then be shifted and the temple rebuilt. One of the siddhas, known to the said devotee, had agreed for the 24 hour puja inside the sanctum sanctorum and we are looking forward for the decks to clear and rebuilding this magnificent temple back.

When we had taken the task of reviving such temples, messages about more and more ruined temples keep coming to us almost daily!!

One important information to add. Mr. Ramamurthy, hardly craves for advertisement and media glare. However, he has been resurrecting temples with his own money and effort for the past 16 years, and has spent his lifetime earnings on these projects. He has a full library of temples he had resurrected and is a close friend of ASI Superintendent Satyamurthy. Still, they feel there are few scholars who could read stone-carved letters and register the data of old temples and findings in electronic media. Plans are afoot to start training persons who are interested in reading such scriptures (kalvettukkal) by few known groups- Ponniyin Selvan Varalaatru Peravai (Ponniyin Selvan yahoo group), by their moderator Mr.Sunder Bharadwaj, by Ramamurthy and by Mr.Satyamurthy and Varalaaru.com team.

One Philanthropist had promised Mr. Ramamurthy that he would cover basic expenses for resurrecting at least 108 Shivalaayams. Therefore, all temples mentioned above, are earmarked among the 108 and our members will act closely with Ramamurthy to
• Collect information and record all such temples which need immediate resurrection

• Restore and decipher kalvettukkal, to bring out the facts of our deep culture and pristine glory of South Indian history back to Indian History

• Make the temples the main hub of activity for the said given village, allow the locals to participate in decision making, maintaining and perform puja for the Gods, doing away with castes in this process.

• Bring newspaper advertisements, mails in internet, asking for information of such temples, from all people, also, calling for youth’s participation in this program, make a strong work force in thousands, who can attend simultaneously many temples in a given day and cover fast what had been left away for ages!

Any true devotee has the right to worship his God. Ramamurthy had given away Rudrakshas for men and Amman pendant for women who start worshipping in the renewed temple and are following Hinduism in the righteous way. There are many stories told by him, which are fascinating, where God showed him the way to look for him, places where men of other religions donated cash and kind to bring back a Shiva temple. In one such instance, the main village head from other religion spent and resurrected the temple and conducted the Kumbhabishekam of the new Shiva temple with his own hands!

The temple_cleaners (REACH) yahoo group members and readers who read this kindly try to build up a team of youth known to you, for achieving the four points mentioned above. It is sad to notice that in each trip, we find new faces and the continuity of trying to make some concrete plan and decisions get postponed.

It is proposed by Ramamurthy to start a registered forum under the guidance of above said like-minded persons, and the volunteers of REACH, temple_cleaners group should build up a mammoth work force in all nooks and corners of Tamilnadu, to enable us take up many projects simultaneously.

If work force building is lost, no way the group can really get into act. Any member making a visit should always come for the next trip too, to enable us discuss more purposefully and allot time on their free time for other activities as planned by the core group. Until this happens, more groups will get formed, but will wane. All will just talk of loosing our heritage and glory. It is time we act and act sincerely.

may god bless all of those who involved n this great work.

could you give me the proper location of the Poonthandalam village and in which part of chennai is this place available.

Kindly answer me at holistic_learning@rocketmail.com